Have you heard about the GladiaCoin scandal? Is the MLM company that scammed thousands of people familiar to you?

Recently, a lot of people have been talking about GladiaCoin and the unrealistic 200% 90 days ROI. Some people still claim the company is legit despite not keeping up their promise.

So, what is the truth? Is GladiaCoin indeed a Ponzi Scheme, or is it a legit company that’s going through a tough time? Let’s find out.

GladiaCoin is a multi-level marketing company that promotes an easy way of earning a 200% ROI in just 90 days. Moreover, the 200% ROI is generated through “Bitcoin trading operations” made by professionals with experience.

Unfortunately, that is not the case with GladiaCoin. The only source of income GladiaCoin has is from the investments affiliates make.

Furthermore, given the fact that the official website of this platform is no longer functioning, we believe GladiaCoin is not a legit business.

Moreover, the official Gladiacoin website lacks information about the owners of the company and who runs it, which is typical of multi-level marketing companies.

However, we were able to find some info about GladiaCoin. For instance, the GladiaCoin website domain was privately registered back in November 2016. Further, the company was launched in March 2017.

Furthermore, as we mentioned, GladiaCoin offers a 200% ROI (in 90 days) to affiliates that sign up and invest in the platform.

In addition, members are given two options when it comes to collecting the 200% ROI. The MLM company offers the ROI via a set timetable or open-ended.

Also, the company claims that all invested Bitcoins are used for trading by professionals with extensive experience in the field.

Unfortunately, typical of scam companies, GladiaCoin does not provide any evidence of trading. Although they claim to buy Bitcoins from one exchange and sell it on another, thus making a profit.

Further, according to trusted sources, the company does not make money from the trading skills of professionals.

In fact, customers receive ROI from affiliates who have joined after them. However, newly invested funds will not be enough to pay the existing members for a long time.

When that moment comes, the MLM scheme will collapse. In most cases, such companies say they have been hacked or are updating the site.

Becoming a part of the GladiaCoin platform is not so simple. The company has come up with a genius plan. Thanks to that plan, they encourage current affiliates to invest more and more into the platform.

In fact, the more money a member invests, the higher the income potential.

Also, the company offers different commission types and bonuses through which affiliates can earn additional money. Not to mention the 200% ROI in 90 days, which GladiaCoin guarantees.

As to joining the platform, users have to pay an associate membership, which is attached to an investment of around 0.05 BTC and 4 BTC.

GladiaCoin promotes a 200% ROI in 90 days if associates invest Bitcoin in the GladiaCoin platform. Let’s take a glance at the compensation plan.

In short, the company uses a binary compensation plan structure for the residual commissions. As such, the amount of percentage that is paid out differs.

Further, this amount is calculated based on the amount the GladiaCoin affiliate has invested. It is essential to note that GladiaCoin associates receive a rate of matched investment volume.

In other words, the volume from the weaker binary leg. Below you can see an example.

If you read our articles regularly, you should know how a binary compensation plan structure works. Typically, an associate, say that’s you, is put at the top of a binary team.

Then, the company, in our case – GladiaCoin, splits the team into two sides, which are called the left and right leg.

In particular, the second level holds four positions in total. The third level of the binary team contains twice the number of positions as the previous level.

Generally, there is no limit on how many levels a binary team can have.

Only two months after the launch of GladiaCoin, the company experienced some difficulties. They announced that all affiliate ROI payouts are suspended for five days due to the “conditions of the blockchain network.”

“Bitcoin transactions have not been confirmed quickly as usual, and this directly impacts the trading operation as we have thousands of queued orders waiting at least one confirmation that has taken up to 24 hours to consolidate.”

Further, all withdrawals were limited to a minimum of 0.1 BTC. A few weeks later, the company announced a new 15% monthly fee on the initially invested amount.

Next, in June 2017, the company was in trouble again. GladiaCoin suspended ROI payouts for another week.

Furthermore, the company acknowledges the fact that they cannot pay the promised ROI. GladiaCoin even explained that turnover had not been recovered, although they followed the work of investors.

However, we all know that this means that there are no new investors at the moment.

Also, it is logical that with a 200% ROI promise, GladiaCoin can choose to pay on a limited number of affiliates before suspending the ROI payouts again.

As GladiaCoin was not transparent from the beginning, it would be safe to say that you should be more careful with multi-level marketing companies that are not open about who owns or runs it. When no specific details are provided, that’s when you should start being suspicious.

Nowadays, MLM Ponzi schemes are evolving and adapting. The only way to protect yourself from such scams is to check the company before investing in it thoroughly.

Also, next time you come across a company that guarantees a 200% 90 day ROI, think about the following:

Why would anybody share a guaranteed way of making a fortune with strangers?

Why would a legit company choose to hide essential information about the company itself if its intentions are pure?

Typically, these are the best Ponzi Schemes, as it is easy to fall into their trap. And although they are illegal, they continue to exist. 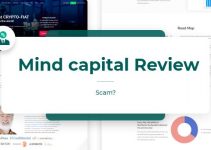